Aug 29, Kathmandu: From the soft juicy momos to the delicious Chatamari or rice pancakes Newari cuisines have always been popular in the valley, be it lunch, dinner, breakfast or tea, Newari cuisine is always a culinary delight. If promoted and marketed well Newari cuisine with its unique taste, peculiar cooking style and natural spices can become as popular as Chinese and Indian cuisine.

According to Anjan Shrestha a food and Beverage (FnB) expert and FnB manager at the Shri Bhhoe Chhen restaurant in Basantapur, Newari food is similar to both western and Chinese food in various ways. "The Newari momo is similar to the Chinese dumplings but is softer than the Chinese dumplings and apart from minced meat the only spices we use are garlic, cumin seeds and coriander leaves unlike the Chinese momos, which contain cabbage, celery and Ajinomoto," he says adding like in the Italian cuisine garlic is a must in Newari food too."We have infinite number of dishes because every Newar community has their own unique cuisines, I have attended a number of Newari feasts and sometimes we come across dishes we have never heard of," says Shrestha.

While talking about unique Newari dishes Shretha told The Oslo Times (TOT) about Choee a traditional Newari dish that’s slowly becoming popular, can basically be called a Newari buff Salami. It is made by adding spices to blood, which is cooked till it thickens. Once the blood thickens it is poured into a strip of buff intestine and tied at both ends and is left to cool down before it is sliced and served like salami.
Though native Nepalese cuisine are slowly becoming popular it is very important to teach students studying culinary the art of cooking Nepali food and its health benefits. "I studied food and beverage from the UK and we were taught about continental, Chinese and Indian food but we never learnt about Nepalese cooking because no one there had ever heard of our cuisines the different varieties of soups and stews we make and how different our cooking is from Indian and Chinese cooking".

So, if you are thinking, What makes Newari food different from other cuisines? Well, according to Shrestha the spices used to add flavour to the dish actually gives the cuisines its unique taste. "We mainly use six spices cumin seeds, ginger and garlic, coriander leaves, heated mustard oil and Methi (fenugreek seeds) without these spices Newari food will lose its authentic flavour and unlike other synthesized spices these spices also have health benefits," he says.

The Newar community has a special dish for nearly every occasion for example Yomari (rice flour dumpling stuffed with sesame seeds and caramel) is usually eaten on Yomari purnima, Samya baji is eaten during Indra Jatra, Sagan Baji which is served to guests as a good luck starter and Sanya Khuna and Takhala (gelatinised buff meat) is eaten in winters. These dishes are usually made during communal (Guthi) feasts organized to celebrate a festival or on religious and cultural occasions but not many people outside the valley actually know about why these foods are eaten on these occasions. 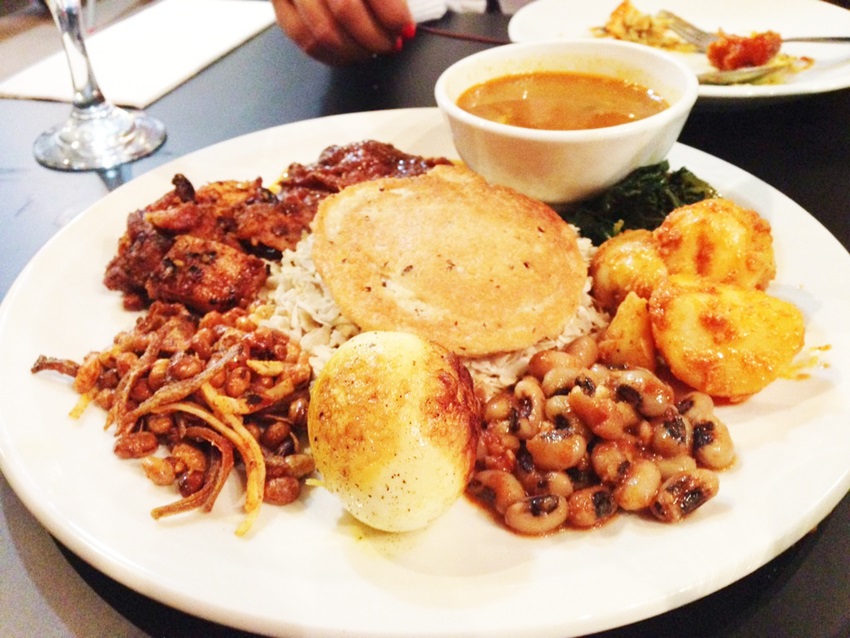 For those of you wanting to cook something special this weekend for the ones you love we have the perfect easy to cook a spicy Newari starter:

Mana Chhyola
Ingredients
700 gm Pork or Buff or goat meat
2 Table Vergetable Oil
1/5 Teaspoon Turmeric powder
10 seeds Methi seeds (Fenugreek)
2 bunch Green onions
1/2 Teaspoon mined Garli
1/2 Teaspoon mined Ginger
1/3 Teaspoon Cucumin
1 Teaspoon hot chilly powder
Salt according to your taste
Preparation (cooking time 45 minutes)
Boil the meat of your choice properly after the meat is cooked, chop it into small pieces and add to a bowl. Now add the spices into the meat, add the oil followed by tumeric powder, garlic and ginger paste, cumin and Chilly powder. Knead the spices into the meat with your hands. Then heat a table spoon of oil in a pan to fry the fenugreek, when the seeds change colour from brown to black pour the hot oil into directly into meat. Chop up a little green onion for the toppings. Add salt according to your taste and Wallah…. your own easy to make Manya Chyola is ready to serve.