Trotting round Manasarovar and Mt.Kailash: An Intro to Nepali Hospitality

Aug 31, Kathmandu: Kailash-Mansarovar, situated amidst a picturesque landscape in the remote mountains of western Tibet, China, is one of the highest, exquisite and most desolate places on earth. It has been an important pilgrimage for the Hindus, Buddhists, Jains and the Tibetan Bonpos for centuries.

I had been excited about going there from the time Jyoti Adhikari (dai), the president of the Eco Trek International informed us that I had gotten the required visa for the sacred trip. It was to become a journey of a lifetime.Our drive to the Chinese border was exceptionally interesting because I was bubbling with excitement, and, even after I was seated onto my seat—I could hardly believe it! I could see members of The Eco-Trek International, seated in front of us patiently answering inquisitive queries with a knowing smile and their kind mannerism touched me from the very first day. My expedition troupe consisted of Padam Rana Magar, Deepak Nepal, Kaji Kumal, Dhruva Sapkota, Sahadev Bhujel, Ashok Bhujel, Ram Gopal Adhikari, Rajesh Bhattarai and Indian pilgrims.

The cry of  ‘Oie Samat… Samat...Samat’ , at the Tatopani border, made me freeze in my shoes, as I shakily turned around to see where the cry was coming from. I saw a woman smuggling a carton of goodies from Khasa into Nepal and the Nepalese police who weren’t even dressed in proper attire trying in vain to catch the culprits.

Anyways, we had nothing to worry about and we crossed over without witnessing further incidences.It was an over an hour drive to Nyalam, which was cold and uncomfortable, as we had to crouch up in the back of the Land Cruiser, turning us completely off. As we climbed down from the jeep, a burst of freezing cold air greeted us in Nyalam, where we would spend an entire day acclimatizing to the high altitude before heading towards our destination.The freezing cold weather and elegance of the place caught us all by surprise and though we were wearing jackets, we hadn’t expected it to be so nerve-rackingly cold. After a quick change into my  thermals, tracks and jackets, I headed towards the kitchen for a chat. The entire trek team was busy preparing soup and tea for the pilgrims who were already covered up in blankets. I grabbed the bowl of soup handed to us and hungrily started gobbling it up while merrily chatting with everyone in the kitchen.

"We are a team, there is no senior and junior. We treat everyone equally here and everyone has to do whatever is required to make our guests comfortable," said Dhruva while puffing a cigarette and stirring the Sambar he was preparing for dinner.

After serving tea, coffee, and soup to other pilgrims in our group, they hurriedly started preparing dinner, and till 12 o’clock (Nepali time in China) they were busy preparing for the next day and cleaning up the dishes.
Kaji, still dressed in his half-pants and t-shirt, told us about Nyalam and its history. "The reason we stay here an extra day is because we want pilgrims to get used to high altitudes and make them realize that the trip ahead will be at higher altitudes and more difficult," he said. As I headed for bed, some of the troupe members headed for the Nyalam disco. I had gotten up very early the next morning only to find our kitchen crew busily preparing breakfast for the rest of us--in fact the entire kitchen team would be up by four in the morning, throughout the trip and Dhruva and Kaji would always be up by three.

On the fourth day, we reached Saga, a small town past the Fitucho lake (Monkey lake), where shrubs of the very popular cooking herb (Jimmu) grow in the wild. The neighborhood, which lies near the banks of the Brahmaputra, is the only place one can sleep at a Three Star hotel with hot water and bathroom facilities.

"One major problem most tourists and pilgrims face during this trip is the inadequate bathroom and toilet facilities," said Padam, who was always a knight in shining armor to many of the devotees. "I have been in this field since 1997 and we have not had any incidences of death on these trips. We all work as a team and our team coordination is next to perfect," he said.

This was very true--since no guest had any room for complaint, they always had the food ready on time, and hot water, medication, and personal attention was always readily available to all the pilgrims even in the harshest circumstances. "The only rest we get here is during the long drives," Deepak said, and adding to this Rajesh remarked, "We sleep in Nepal standard time and get up in the Chinese standard time so we hardly get  four hours of sleep a day."

We had reached lake Mansarovar on the fifth day after passing through beautiful snow-capped hills, mountains, sand dunes and lush-green pastures. It was from there that we got our first glimpse of the Kailash-the abode of lord Shiva and we could feel adrenaline rush as we jumped with excitement and carelessly opened the doors of our Land Cruisers racing towards the lake.

According to scriptures, the lake is the source of four great rivers--the Indus, the Sutlej, the Brahmaputra and the Karnali. It had been a sight for sour eyes and everyone could be seen collecting stones, hurriedly taking photographs as if the lake were to disappear soon, while steadily trying to fit the beautiful Kailash together with the Nandi into one’s lens. The magnificent snow-clad Kailash situated at an altitude of 22,028 ft is considered as a site of immense natural power where the divinity takes the physical form.Next to Mansarovar, lies a mythically evil lake the Rakshash Taal. Till date, no one has dared to touch the waters of this beautiful lake because it is believed to be evil. These two lakes at the height of 14,900 ft are the highest freshwater bodies in the world connected by a channel called Ganga Chu.

We had reached Tarchen, the base camp of Kailash on the sixth day of our departure from Katmandu and the very next day our three-day trek round Kailsah termed as Kora began.

The Kora/ Holy trek around the mountain:
Day 1:
The seven-hour trek past the stone formation of Lord Ganesh up on the hills, with wonderful views of cascading creeks, streaming waterfalls and the 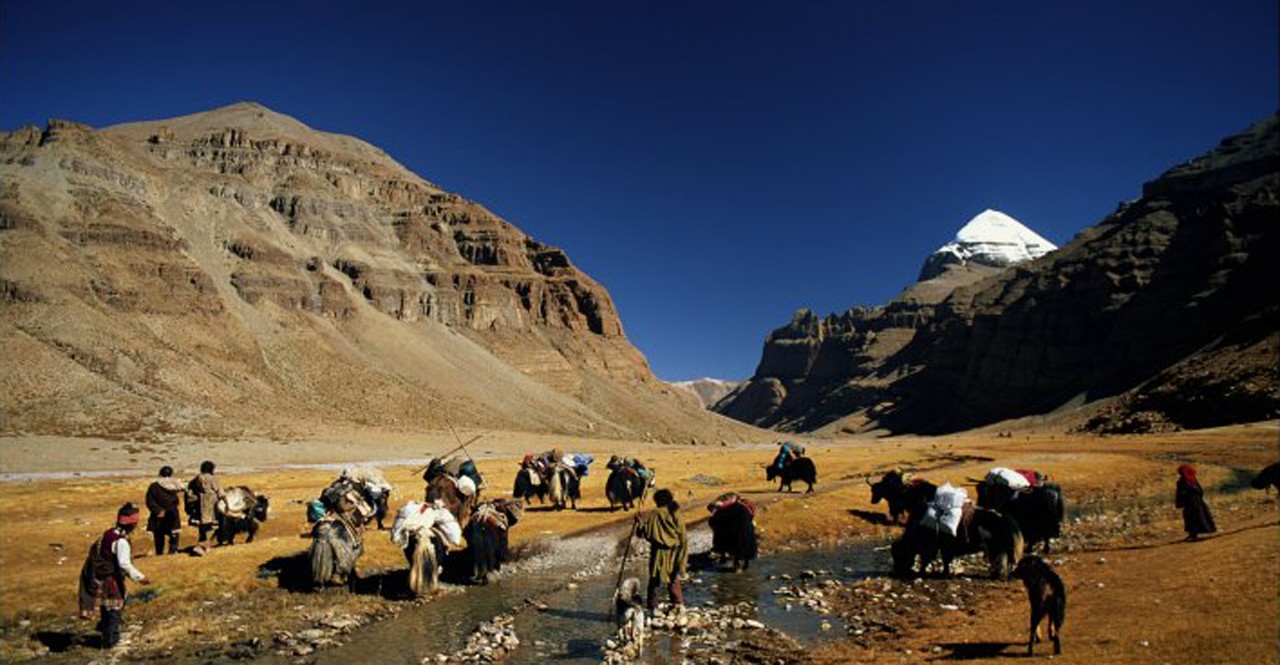 mighty west face of Kailash seemed like a mystical race, with yaks carrying heavy loads of luggage, Tibetan porters puffing cigarettes, and pilgrims on horseback to a lodge nestled on the north phase of Mt. Kailash. While we steadily walked towards our destination for the night it started raining, or so with thought, what had first started out as rainfall turned into soft flakes of snow brushing past us as we picked up our pace in a hurry to reach our destination.As we reached our lodge, we were greeted with the refreshing aroma of coffee and popcorn brewing inside the kitchen where the entire crew was merrily preparing tea, coffee, soup and popcorn for the rest of us. "Come sit by the gas stove it's warm here," said Kaji who was in his shorts, starring at us shivering from the cold.

Day 2:
The next day we had a steep climb towards the Dolma Pass (5630m) which was the hardest because of the lack of oxygen and slippery rocky paths during the uphill accent. I enjoyed looking at Mt.Kailash on way up the pass, and the snake like formations on the mountain fascinated me, so instead of focusing on the treacherous trek uphill, I was awed by the  mountain and wasted most of my energy clicking photos. Half way up the mountain and my next to empty backpack felt like  it was a hundred kilos and my head started spinning and I was at a loss of breath as I know treaded slowly uphill. 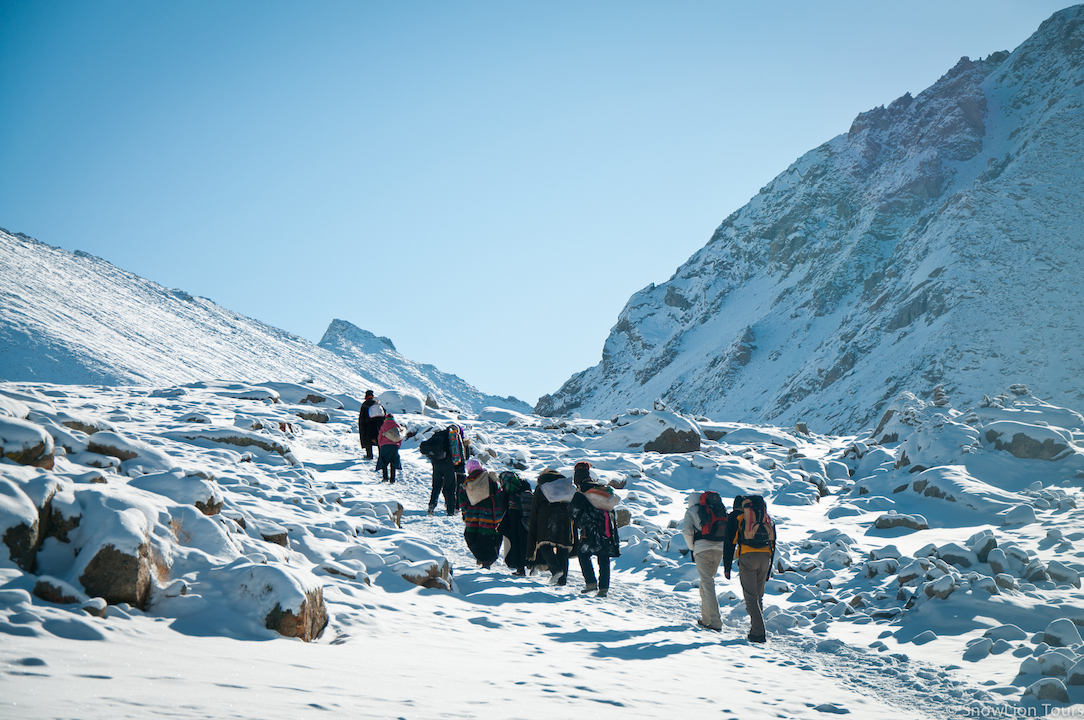 It was at that point that one the guides, kept me going by giving me sweets and water to drink, we walked on slowly, the higher we climbed up the slippery rocks the more difficult it got. After a very long climb, my spirit lifted I could see the yaks which had trotted in front of us resting. We had made it to the top of the Dolma pass.
This was is a sight for sore eyes and we celebrated our success. This rocky expanses where the bamboo pieces draped with clothes had been erected by pilgrims as homage to the dead is the closest point to Mt.Kailash, which looks like a hand away.

After a short break at the top of the pass, we started our steep descent past Gauri Kunda to our final resting camp.  The Gauri Kunda, or the 'Tukje Chenpo Tso'-- the 'Lake of Mercy', like the Tibetans call it is a fresh water pool, which is considered as the of the highest fresh water body found on the planet. Legend has it that this is where Lord Shiva's wife Goddess Parvati would bathe. And therefore it is believed that a dip in this freezing cold emerald water cleanses ones sins.
So most pilgrims visiting Kailash either immerse in its icy cold mostly frozen emerald waters or just sprinkle it on one's head to

get rid of all forms of impurities and cleanse ones soul. Like a few other pilgrims who were preparing to walk into the lake, I too took the detour down to the lake and like the Tibetan pilgrims before me, put my hands into the icy cold yet unexpectedly soothing water and sprinkled it over myself, with the hope of cleansing the sins I had committed in my short span of life, before filling smalls bottles other pilgrims had given me with the enchanted water of the holy pool.After this little adventurous detour, that had taken me sixty meters below the pass and away from the original route, I along with a few other pilgrims headed up the path, which proved to be another arduous climb.

As we joined the rest of the troupe, I realized that the already toilsome trek had turned even more difficult for our crew, as they had to carry a lady who had broken both her legs on her way down the rocky trail, this slowed us down significantly, as we now treaded down the slippery stones to the base of the holy mountain in our effort to encircle this mystic manifestation of Mt.Meru. Our walk from then onwards was mostly easy and we hiked happily towards Zutulphuk, where we would spend the evening.

Our final day of trek was easy and we raced along with the crew who hurriedly carried the lady to where our vehicles were waiting to take us back to Tarchen. The Indian lady and her family under Deepak’s care were immediately raced to Kathmandu from Tarchen where she underwent surgery before returning to India safe and sound.

We however, took our time, and trekked for almost three hours which completed our circumambulation around the holy mountain. After three hours of walk through picturesque landscape we found our land rover waiting for us at the end of the Kora to take us to Darchen where Dhurva dai had prepared idli and Sambar for lunch. I savored the South-Indian delicacy before heading to Mansarovar where we spent the night before our long journey back to Kathmandu.

The entire trip was a lifetime experience as it showed us what hospitality really meant and the kind of hard-work, discipline, dedication, and team spirit that go into making such an arduous, equally dangerous and one of the most difficult treks in Asia a huge success!